For Ruyu, part of her life of solitude was in part also influenced by her upbringing by her two “grandaunts” who took her in after Ruyu was abandoned on their porch. Their grandaunts raise her to be efficient, not to entertain trivial things giving her with to no affection. For me it was interesting to see Ruyu’s upbringing and how it plays a role in her detached nature as an adolescent and how this pattern continues into adulthood. For her, to have an opinion on something is to be invested in it, to care and as such she rarely voices opinions when asked, keeping herself distanced from others.

In contrast to Ruyu, Moran is an insecure adolescent who believes in happiness and sharing in that happiness with others. She knows deep down she is unremarkable but recognizes her kindness towards others are what makes her special…until Ruyu comes along. When Moran’s attempts to connect with Ruyu, to seek friendship and companionship are rebuffed, Moran begins to change and question her own worth. The journey she takes from being a happy adolescent to being a woman who cannot or will not accept love or attachments although I suspect she yearns for some sort as she reaches out to her ex-husband.

Right away Moran banged that door closed. To be caught at hoping- even if it was just by herself…was like being caught once when she had timidly played a simple tune on a piano at a colleague’s party. What right…do you have to touch the piano?

Boyang, the playboy or the sugar daddy. A bit of a cliché maybe but based on truth. Isn’t that how some men cope with an inability love? Boyang also struggles with the emotional and real life consequences of the poisoning of their childhood friend. Boyang has been a witness to the end result of the incident and longs for some kind of closure with regards to Moyan and Ruyu since the three have been estranged for years.

This novel is not to be read for it’s plot but rather it should be taken as an exploration of the human mind and entertain a different point of view of the human experience. It is more a character study than anything else where you go into a character’s past/present, their thoughts and motivations and try to understand them. Some would say these characters lack some part of their humanity, the interesting thing is to build the puzzle as to why. No one can write detached characters with a subtle complexity like Yiyun Li.

…Boyang wondered if in his friendship to Moran he saw the nascent self he would eventually turn into: selfish but not enough to be immune to the pains caused by his selfishness; adamant in refusing to suffer yet not blind enough to others’ suffering.

Our three central characters have chosen solitude to varying degrees in part stemming from the incident that occurred during their adolescence. As I read each character chapter, in particular Ruyu and Moran’s I’m diving into their heads, trying to understand their perspectives and their choices: having little to no attachments to those around them and willingly choosing a solitary life.

If you love can appreciate a novel with elegant writing with complex characters you wish to get lost in then this novel is for you. It was a bit of an introspective read for me so you just have to be in that kind of mood to enjoy Kinder than Solitude.

I’m giving this trio of emotional recluses a 4 out of 5.

This was a few weeks ago, as I enjoyed a stroll around a mostly empty Pike Place under the moonlight. Nothing like a moonlit stroll.
Exploring my new home through photography has been so rewarding. Now, everytime I look down the street or look up to the sky at something I think..."that would make a great photo." Then I get mad at myself for not bringing my camera with me. 😂
Finished reading this gem of a book which had been on my list for the longest time and I ended up buying it in Madrid. Oh my heart!
To be or not to be? To work at a convenience store or find a "real" job, get married and have babies?
What foods have you enjoyed when visiting a new place?
Looking back in the rear view mirror of your life, what's one piece of advice you'd give your past self?
Follow The Book Loving Pharmacist on WordPress.com 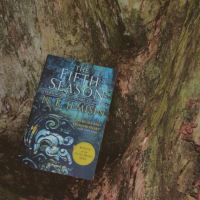