Double the trouble. the Black Tides of Heaven & the Red Threads of Fortune by JY Yang. [Review]

Last month I slowly and cautiously ended my two week reading break with this silkpunk fantasy I bought a few months ago. 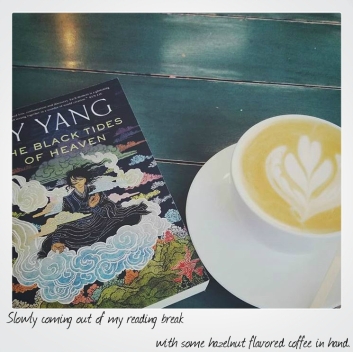 These twin novellas center around, you guessed it, twins. Black Tides starts out with the beginning of the twins’ childhood and later centers on one of them while Red Threads centers on the other twin. While the circumstances and general plot of both novellas changes (look up the blurb for more of that), there is a consistent plot thread in both novellas that follows how the twins are trying to find their place in the world. One twin by finding a place in a rebel movement and the other tries to overcome their grief after losing a loved one.

Since both books center around the twins they see the most development. There is a cast of a few secondary characters who don’t see a lot of character development which is understandable due to the length of the book.

The twins are as different as night and day; one sensitive and one bold and brash and Yang did a great job of making each twin their own person.

The beginning of Black Tides was interesting and what shone through for the first half of it is the relationship between the twins, their love for each other and how they depend on one another as children. Their relationship was touching to read but by Red Threads, this takes a backseat and you don’t really see much of that affection except in a few, fleeting moments. Although I wouldn’t have wished for that it makes sense, the twins have become adults and they are each living their own story, separate from the other.

Yang’s world building is pretty great! In Yang’s world, children are basically genderless (referred to with gender neutral pronouns like ‘they’ or ‘them’). In this book, that choice is an important step in the character’s development. This whole dynamic I found to be unique and interesting to see it unfold.

While character development and world building are the highlights of both books, the contained storyline within each book for me fell flat and I wasn’t very interested. The magic system can be a little hard to understand at first as there is no explanation for how it works. In Black Tides, years can go by between the first few chapters and I just felt like I was missing something. The first book felt like it was all over the place; (mild spoilers!) beginning with the Protector and Head Abbot, time jump into the twins’ monastic life, time jump into living at the palace, time jump into the beginnings of a relationship, time jump into adulthood; I felt like I was grasping at straws while reading it for a chunk of it.

While I didn’t love the plot, I can’t help but celebrate this book’s take on gender and sexuality!

For patients wanting a dose of LGTB+ characters with their usual regimen of fantasy and want to try something new in the genre, then I recommend this one! Oh, and the artwork on these covers are amazing!

Prognosis: 3 out of 5 mortars