Back when I posted Part I, it was my intention to do periodic recommendations and highlight some of the short stories published on Tor.com. Their short stories seem to garner very little attention in the bookish community from what I’ve seen. Here’s hoping I can do this more frequently.

“You know how the story goes. One night, you pick up a hitchhiker on a country road. A young lady. It’s always a lady. This lady, she’s paler than the moonlight and doesn’t talk a lot.”

A short story based which deals with the mysterious deaths of hitchhikers and the urban legends that stem from these deaths. The author did well in creating a somewhat spooky setting but that’s about it. This was an ok story; not my favorite. Although technically I didn’t like this short story much, fans of urban legends might find this an interesting read.

Into the Gray by Margaret Killjoy | Fantasy | Released Abril 2018

One is the Lady of the Waking Waters, an immortal mermaid. The other is a thief, who steals lives until a wish can be fulfilled, and a life-changing choice must be made.

This one is a fairytale-like short story with…shall we say characters of questionable morals. I like how the protagonist kept me guessing as to who he/she. It had it’s moments the ending was kind of a let down for me.

Near the vast steelworks of Karshad, a journalist has fallen in love with the residual personality of a metallurgist, but what will happen when realliance—and forgetting—comes?

This one was oh so confusing. I had trouble wrapping my head around how metallurgists work. Basically, a part of their mind goes into the metal to manipulate it for long periods of time and what’s left in the body is a residual personality, like a shadow of the “real” person. So when this guy falls in love with the residual, what’s going to happen to her once the primary personality comes back? I really liked this whole concept (although confusing) and haven’t read anything quite like it.

Whats your favorite summer activity?
So the Seattle Public Library reopened recently. Needless to say I was very excited about getting a library card! Now I just spend my time looking through the library's catalog and make a list of all the books I want to check out😍
It's been 2 weeks since my move to Seattle and my reading has gone to hell. But at least I finished the First Sister which only took about a month (not anything to do with how good or bad the book was).
My new favorite author, Yiyun Li. An immigrant from China, you never would've guessed she learned English later in life when you read her work. She writes beautifully and elegantly. This is the third book I've read by this author and I feel there are many life lessons and things to reflect on in her works.
Has anyone reached that point in their 30's where you are starting to reevaluate your life and find yourself going down an existential rabbit hole and you wish you could ask Deep Thought from Hitchhiker's Guide to the Galaxy your purpose in life?...or is that just me?🤷‍♂️😂
There be lokyns about!
Follow The Book Loving Pharmacist on WordPress.com 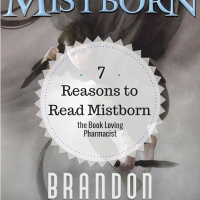