I’m amazed at how a few years ago I convinced myself to not buy physical books anymore and now I’ve bought quite a few over the last few months. How things change!

Just wanted to share some of the books I got during February and March. And since a few of those books have gilded pages I’ve officially dubbed this the Gilded Pages Book Haul. There are a few very special ones in this haul!

I was introduced to this series by collectiblesciencefiction who sells vintage paperbacks of sci-fi and fantasy books. I had never heard of this series and when I saw he was selling these cool paperbacks of Book 2, 3 and 5 I looked up this series and decided I had to have the rest in the series (with the matching covers of course). I went on over to AbeBooks and fortunately, I was able to track them all own.

2. A Conjuring of Light by VE Schwabb

Weird how I bought book 2 and later book 3 first and haven’t even bought the first book in the series yet!

Volume 1 of this book was my first manga and I plan on continuing this series. Will do a review about it at some point.

4. The Red Fairy Book by Andrew Lang published by the Folio Society

This one I was excited about! Ok so technically this one isn’t really gilded but it kind of still counts. I had heard so many good things about these editions and the artwork is stunning. I’ve been wanting a Folio Society fairy book for about a year and I finally got my hands on one! The quality of this book is amazing!

Mistborn I’d been coveting for about a year as well. Around Christmas time WoA came out and I crossed my fingers hoping it wouldn’t run out and I could get them both. Thank the Lord Ruler I was able to get my hands on these. Really great quality, awesome endpapers, artwork with gold gilding on the edges of the book.

I’ll most definitely do a review on the Mistborn and FS fairy books in the future. 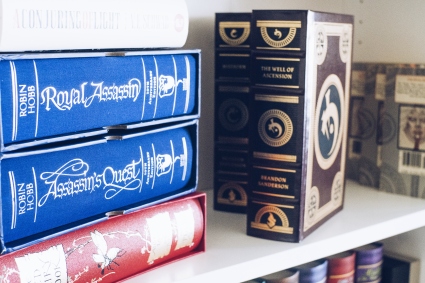 I’ve been meaning to start the Farseer trilogy for awhile so now I can read it in style with these 20th-anniversary editions with silver gilded pages and some great artwork.

Have you read any Moorcock books?