Infinite Crisis is a 7-issue miniseries published in 2005-2006 by DC Comics. It is written by Geoff Johns and illustrated by Phil Jimenez, George Pérez, Ivan Reis, and Jerry Ordway. This can be considered a continuation of the 1985 storyline Crisis on Infinite Earths, where a being called the Antimonitor is wiping out all the parallel universes from existence. The heroes from the remaining Earth’s help fight back and the result is that instead of multiple parallel Earths there is only one Earth. 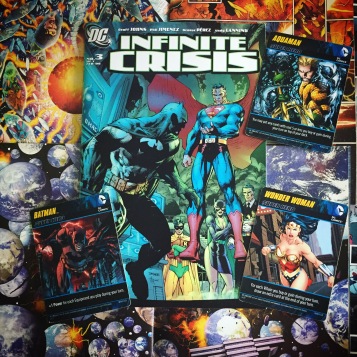 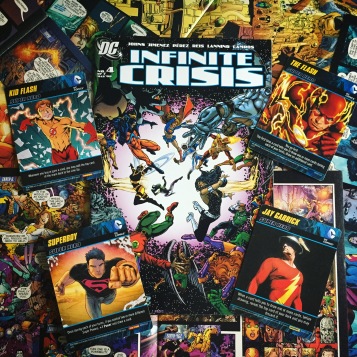 In Infinite Crisis, as time goes on and horrible things happen on this new Earth (Wonder Woman killing a villain, members of the JLA erasing Batman’s memories and more) certain survivors of the parallel Earths take it upon themselves to bring back a perfect world into existence. However, the heroes have their hands full.

OMAC’s, which are humans that turn into drones or robots, are hunting down metahumans and superheroes along with technology stolen from Batman, a powerful entity known as the Spectre is destroying all sources of magic in the world, the Justice League has disbanded and its watchtower has been destroyed, there is an anomaly at the center of the universe which threatens reality and the super villains have formed a new Secret Society. 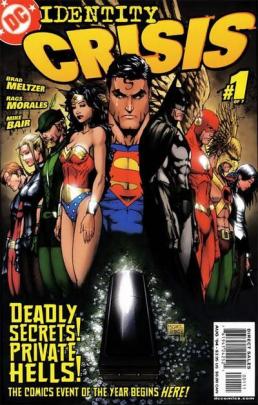 Someone is targeting the loved ones of superheroes. No one knows who’s responsible but a few members of the JLA have a suspicion…and it is connected to an event perhaps long forgotten in the league’s past in which the good guys turned on their own.

This was an awesome storyline with lasting repercussions for characters and the Justice League of America.

Ted Kord, better known as Blue Beetle, is investigating an embezzlement from his company’s funds. What he’ll uncover will be far worse…too bad none of the heroes are taking him seriously.

The organization Checkmate led by Maxwell Lord has sleeper agents of OMAC’s all over the world. Their mission: surveil and eliminate metahumans and superheroes. 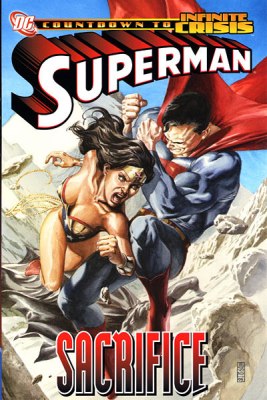 Superman is mind-controlled by an unknown villain and attacks the JLA. The only one standing between Superman and everyone else is Wonder Woman. Unfortunately, to free Superman from the villain’s mind control she must make a choice that will forever change the way others see her and possibly alienate her from everyone.

There are other storylines that tie into Infinite Crisis but for me, these are the ones that have the most impact and have quite a few character death’s which makes the stories heavier with more impact.

My thoughts on Infinite Crisis

When I first read this I was a newbie to comics and as a newbie what surprised me was the storyline’s dark tone and superhero deaths. Watching superheroes getting maimed and killed was so surprising for me…I loved it! Storylines in which no superhero is safe are rare and have to be read and enjoyed to the fullest!

Infinite Crisis has a lot of build-ups and while by the time it’s over, I felt there was not much of a difference or consequences to the storyline, nevertheless it’s one I enjoy it and still skim through it from time to time. It’s a good storyline to dive into especially if you’re a newbie to DC Comics. Just because these storylines don’t follow the current continuity does not mean they can’t be appreciated and read anymore! 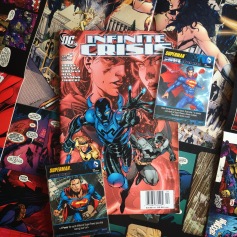 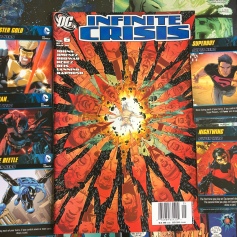 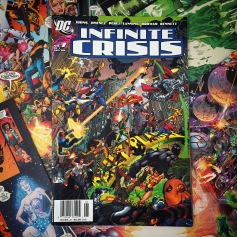 I give Infinite Crisis 5 out of 5 mortars

Has anyone reached that point in their 30's where you are starting to reevaluate your life and find yourself going down an existential rabbit hole and you wish you could ask Deep Thought from Hitchhiker's Guide to the Galaxy your purpose in life?...or is that just me?🤷‍♂️😂
There be lokyns about!
This shot of a book against the sunset I took kind of reminds me of the monolith from 2001: A Space Odyssey. Have you read it?
Do you enjoy a little stroll at night?
So I put together what could be viewed as a teaser for the Bone Shard Daughter and will post it later on this week with my review.
"How much of your life is lived to be known by others? To be understood? How much of your life is lived to know and understand others?"
Follow The Book Loving Pharmacist on WordPress.com 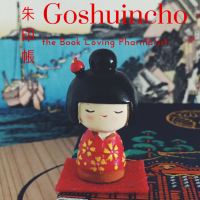 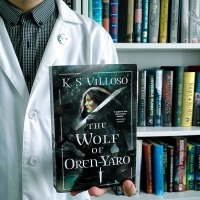