An important thing that some lifestyle magazines sometimes lack when giving recommendations or stating supposed facts is evidence. And I’m not talking about just any evidence, I’m talking about scientific evidence in the form of observational studies, clinical trials, etc. So when I read some random magazine’s article on the benefits of reading I’m thinking, “I’ve heard some of this before but I’ve never seen the evidence of this.” So I did a little research and came across this interesting scientific article titled, “Life-span cognitive activity, neuropathologic burden, and cognitive aging.”

So, here I give you a piece of real scientific evidence regarding a benefit of, not just reading, but activities that stimulate our cognitive function (aka mental activity/processes).

Be warned, this is a very condensed summary of the article and it discusses more than what I’ve summarized. This study was carried out by folks at the Rush University Medical Center, Chicago, IL. It was published in the journal for the American Academy of Neurology. The study had 294 patients and took into account their cognitive activity during early and late in life and tried to establish if there was some sort of relation between three things:

This study was carried out by folks at the Rush University Medical Center, Chicago, IL. It was published in the journal for the American Academy of Neurology in 2013. The study had 294 patients and took into account their cognitive activity during early and late in life and tried to establish if there was some sort of relation between three things: 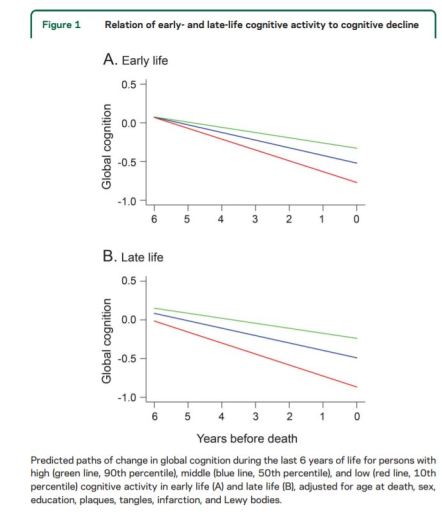 Unfortunately not. I’ve met people who think or have read somewhere that keeping your brain active will prevent Alzheimer’s or dementia but that is not the case. Sometimes our brains or genes are wired a certain way and it may be inevitable for some people. However, the study does note that cognitive activities may slow down the onset of Alzheimer’s and its progression, it will not stop you from developing it altogether. “The fact that cognitive activity has an association with cognitive decline that is independent
of neuropathologic burden shows that more frequent cognitive activity can counterbalance the cognitive loss associated with neuropathologic conditions.”

It’s good to see scientific evidence backing this up and be able to see this evidence first-hand as well in real life. My 86 year old grandmother loves reading and maybe now I can say that being mentally active for most of her life has helped her maintain “an edge” to her mental and cognitive functions. Although she can be forgetful like a typical grandmother, I’ve seen other people her age who, with no Alzheimer’s or dementia, or a bit slower than she is. According to the article,

“Neuroimaging research suggests that cognitive activity can lead to changes in brain structure and function that might enhance cognitive reserve.”

An important limitation to take note of in the study is that the reliability of the findings will have to be proven. In other words, the results of this study don’t necessarily apply to the general public in real life! This is one thing that’s important about studies and articles in magazines. You can tell me what great results they had but are they applicable in the real world?

Still, I don’t know about you but I feel much better having read this on a peer reviewed article than a magazine on a newsstand but that’s just because I’m nerdy like that! 🙂

For a complete look at the study, its results and discussion you can find the link to the article here.

Have you ever been told that by doing mental activities you can prevent Alzheimer’s or dementia?

What are your thoughts on this article?

This was a few weeks ago, as I enjoyed a stroll around a mostly empty Pike Place under the moonlight. Nothing like a moonlit stroll.
Exploring my new home through photography has been so rewarding. Now, everytime I look down the street or look up to the sky at something I think..."that would make a great photo." Then I get mad at myself for not bringing my camera with me. 😂
Finished reading this gem of a book which had been on my list for the longest time and I ended up buying it in Madrid. Oh my heart!
To be or not to be? To work at a convenience store or find a "real" job, get married and have babies?
What foods have you enjoyed when visiting a new place?
Follow The Book Loving Pharmacist on WordPress.com